Tales From The Frontline: My Freight Transport Initiation 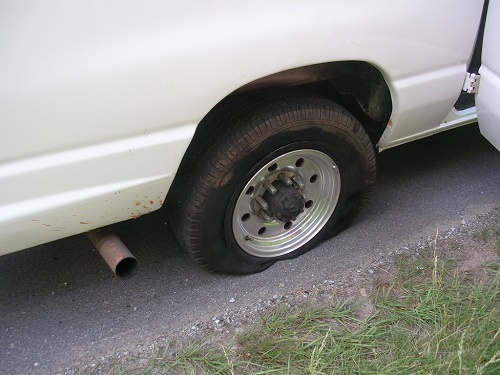 " Getting help with a flat tire from a man and his son" by benuski is licensed under CC BY 4.0

Well, I said I wanted to close out this month of fan interactions with a bang, and I almost managed to. Our last story may not be all that impactful, but it's just as adorable as the one we had last time, about the couple who met through the freight transport platform. In Jill and Tom's case, they were already dating when this story takes place – but it is still a romantic romp well worth sharing! So without further ado, here it is in their own words.

'My name's Jill, I'm from County Armagh in Northern Ireland, and this story is about the first time I went with my husband, Tom, on a freight transport job.

Now back then, Tom and I weren't married yet – we were dating, and had only just gotten to that phase where you start to feel like things are working, you know? So we were giving fate a bit of a push and trying to prepare for a life together, which did end up happening. Anyhow, one of the ways in which we went about it was to try and get into what the other one liked. Tom – bless him - had me try to teach him to knit, and in return he took me with him on his lorry. [I think you may have guessed it when I mentioned 'freight transport' up above, but my Tom's a lorry driver.]

Well, that was my baptism as far as long journeys inside commercial lorries went, and let me tell you, it was an adventure! We went halfway across the country – 'Norn Iron' isn't that big, but still – and wouldn't you know it, it was raining heavily (because when's it ever not?). You could barely see a yard in front of the car, and here's Tom driving through the rain, on a slippery road, with a very nervous passenger trying her hardest not to make him lose concentration. It's a wonder we didn't crash or go off-road – only shows how skilled my hubby is behind the wheel!

And then, to top it all off, we had a flat tyre – so we had to get out of the lorry in the downpour to change it, and call the specialist car and everything! By the time we were done, poor Tom was really late with his delivery. Fortunately, the people he was taking the cargo to were lovely, and we even got some hot cocoa for our troubles. But as far as I was concerned, that was my first and last freight transport experience - and it remains so to this day! The only upside? We did get closer – mostly by having a good laugh about it – and the fact that we didn't both go bonkers over that trip showed us that yes, this thing would work. And it did.'

Awww – I feel all warm and fuzzy now! Thank you guys! And thanks everyone else who sent stories that weren't published – believe me, I read and enjoyed them all! Sadly, we only have so much space...

Ah well, maybe next time. Until then, ta-ra!