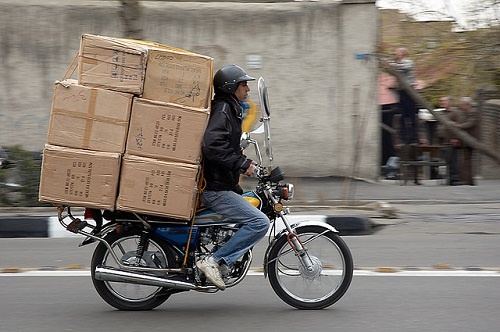 Express Delivery by Kamyar Adl is licensed under CC BY 4.0

Well – it's officially time. The countdown to Christmas is on, and I'm sure many among my courier driver readership are about to enter their busiest – but also most profitable – time of the year. I hope everyone is bundling up nice and warm and preparing for two months of delivering all sorts of Amazon and eBay parcels to people around the United Kingdom!

Let's not get ahead of ourselves, however – after all, it's only October! There are still a good few weeks to go before it's time to bring out the tinsel and tree ornaments, so let's save that particular subject matter for when December rolls around, shall we?

In the meantime, however, we do have to entertain ourselves, don't we? And that is why, today, I am bringing you one of those old fan favourites – a reader interaction!

'But Gertie!' I hear you scream, 'we've done so many of these lately, surely you've run out of subjects?' That is the thing, though – I haven't! I keep coming up with new ideas that I like, and that I think you'll like as well!

Take this week's subject, for instance – it came to me while I was working away at my cafe. Specifically, I was making a gentleman a cheese and ham toastie (have a look at this wonderful recipe stolen from Jamie O) and I noticed how I always seem to put the ham on top of the cheese – it's my own little quirk. From there to me having the brilliant idea of asking you lot about your professional quirks was a very short leap! I'm sure most of you will have at least one – after all, every courier driver is still a human being, and human beings all have quirks!

So that is the theme of this week's interaction: I want to know what your quirks are as a courier driver. What are those little things you catch yourself doing all the time, or without which a job just doesn't seem like it's being done right? I'm dying to know so be your usual fabulous selves and fill up my inbox ahead of next week's post, won't you?