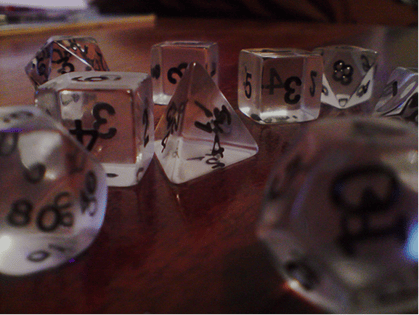 It's that time of the year that some call the Silly Season, so I thought I'd come up here with a silly post to – hopefully – put a smile on your faces! See, while most of you were at the beach or visiting family or abroad or what have you, one of my readers was busy drawing up a comparison between self-employed courier jobs like his own and – of all things! - roleplaying games! And the most fascinating thing is, he absolutely has a point! So I've decided to make him the star of today's post – which also works for me, because now I can go down to the beach a half-hour earlier than usual! Whoo! The stage is yours, Ben from Devonshire!

I'm a long-time reader, first time writer – and the reason I'm writing has to do with this little theory I devised, which you may find entertaining.

See, I, like many if not most of your readers, have a courier job. And when I'm not working, one of my hobbies is table top roleplaying. Now, to explain what table top roleplaying actually is in detail would take up way too much of your time, but if you've ever heard of Dungeons & Dragons, that's basically it. If you haven't, picture a board game crossed with Lord of The Rings and you would be close.

Anyway, as I spend countless hours on the road travelling back and forth, all alone, I actually get some thinking done. And I've come to the conclusion that self-employed courier jobs and roleplaying – not just table top, but also the video game kind – are not that far apart. In fact, they're pretty similar.

Now, that may have made you laugh, but consider this: roleplaying games usually send you on a quest – something you are working towards, that you have to get to. Self-employed courier jobs are also quests in a way, since you're travelling to wherever your parcel is, and then to wherever it needs to be, just like you would in a game. You could also look at each new parcel as a 'fetch quest', as you are often required to go out of your way to get them, and more often than not cannot go about your day without obtaining them. You see how it all makes sense?

That's not all, though. Most roleplaying games have you attribute points to your character, for power, intelligence, charisma, etc. If you're seeing how this relates to self-employed courier jobs, then congratulations, you'd do well at roleplaying! You obviously need good doses of all these attributes – especially charisma – to do well in the courier and haulage business. A glib tongue can get you out of many scrapes with difficult customers, believe me! Unfortunately, unlike in a game, you don't get to choose how much of each thing you want – you have to make do with what God gave you. Still, it is a parallel worth considering.

For all that self-employed courier jobs are similar to RP games, however – and I hope you can see how they are from the examples above – there is one thing in which they definitely have an advantage: you are your own Game Master, and don't have to suffer someone else making your life difficult! This is, of course, not true of 'regular' courier jobs, which brings them even closer to something like Dungeons & Dragons.

I hope I've made you laugh with this little theory/comparison of mine, but I also hope you've seen how it makes sense. For now, I remain a dedicated fan,

Reading this again, I have tears of laughter streaming down my face! Thank you, Ben, for making my day! As for the rest of you, see you at the beach!