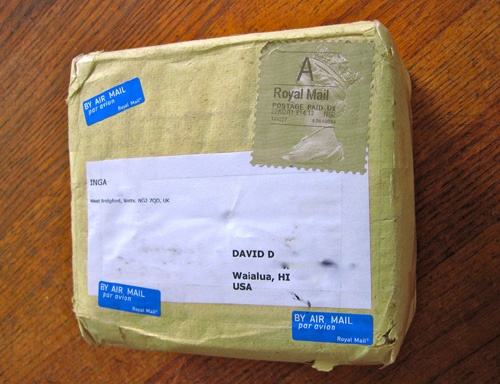 A Surprise In the Mail: International Parcel by davidd is licensed under CC BY 2.0

How is everyone's week going? Well, I hope. Mine has been quiet – it always is, during the summer – and I'm already thinking of my two weeks coming up in sunny Spain later this month!

Don't worry, though – I won't leave you high and dry. I wouldn't do that to the best readership on the Internet! No, there's plenty of time in the evening, once I've come back from the beach and a nice fish supper, to write blog posts for you lot – and I fully intend to do just that.

In the meantime, though, there is still this week's entry to be dealt with. As always with posts where I reproduce replies from my readership, I can't wait to share

your stories with everyone.

Now, of course, the theme of last week's post was courier jobs gone hilariously wrong. I challenged you to share

your stories – from the most insignificant to the most outlandish – and, as ever, you were up for the challenge! Below are just a few of my favourite entries from this week's haul.

'Oh boy – funny stories from courier jobs, huh? How about the time I got sent to an address that didn't exist? That's right – the number the parcel was supposedly meant to be delivered to did not exist, at least not on that road! I eventually found the lady a few houses removed – it turns out the label was smudged from the rain and what I thought was a 0 was in fact an 8! But it took me a good 15 minutes of trekking in the rain knocking on doors to find her!' - Gary, Berkshire.

'One time, when I was very young, I botched one of my courier jobs something awful. I went to the offices of a company I was supposed to deliver a parcel to and left it there – not aware that there was another office for the same company across town! Guess which one was actually expecting the parcel? Luckily, my boss was my Dad, and he wasn't too mad – but he did take that off my pay!' - Steph, Wiltshire

'When I was younger, me and my mates that I worked courier jobs with used to race our bikes when we were going the same way. One time, I was engaged in a race with a buddy of mine, Steve, and we were zooming in and out of London traffic, and we were so focused on that that we didn't see the bobbies' car - until we both crashed into it! We got a stern talking-to, of course, but the most embarrassing part was going head-over-heels over the bonnet of the panda. Luckily, we both had our helmets on!' - Jason, London.

Those were my favourite ones, but there were so many more I could have published, as usual – you lot are absolutely brilliant!

See you next time, hopefully from Benidorm!