Upskill to Become a Drone Pilot 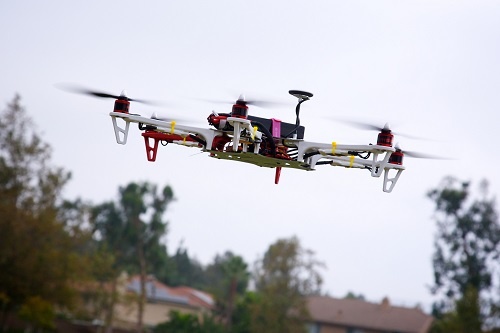 Drone First Test Flight by Richard Unten is licensed under CC BY 4.0

Well, it's the third week of February, and guess what – we will be discussing our third serious topic!

That's right, my more serious posts continue to go over extremely well with you lot, so I've decided I'll give the people what they want, and make EVERY post this month about a pertinent and serious topic.

In keeping with that spirit, today, we'll be discussing a particular bit of technology that has been more and more airtime (no apologies for the pun!) in the industry lately – drones! Yes, those little aeroplane thingies that can apparently make deliveries look like they could be giving the good ol' delivery van a run for its money in the future, when it comes to cost-effective logistics!

As some of you probably know, the first time these little gizmos were used in the context of deliveries was during a trial run by Amazon. That must have proven very successful, because many other companies followed in Amazon's footsteps and began sending out drones to do deliveries. The technology looks like it will continue to evolve into the future, so it's time we ask that all-important question: could drones eventually replace the delivery van? (By the way, the answer is no in case you're getting worried!)

It's being reported that drones are increasingly in demand, as larger companies latch on to the impressive cost/benefit ratio these little contraptions give them. As a result, a number of providers have started offering drone piloting courses, giving courier drivers a chance to upskill and learn how to operate these machines – it certainly can't hurt to get an extra feather in your cap.

Of course, there's no reason to panic or start predicting doom and gloom. Change within an industry takes time, and a change this big and this significant is likely to be in transition for decades. I know technology moves much faster nowadays than it used to, but there's no way drones could totally replace the humble driver and delivery van altogether – it's just not feasible for the smaller operators.

That aside, I think anyone with an interest should look into one of those drone piloting courses, just in case. Even if you don’t actually start using the skills in your day-to-day life, you'll have fun learning them!

Well – that's it for me for this week. I hope you've enjoyed yet another post on a serious subject, and I hope you'll check back in next week for the last entry in this February series.