At The Movies: Kiki's Delivery Service 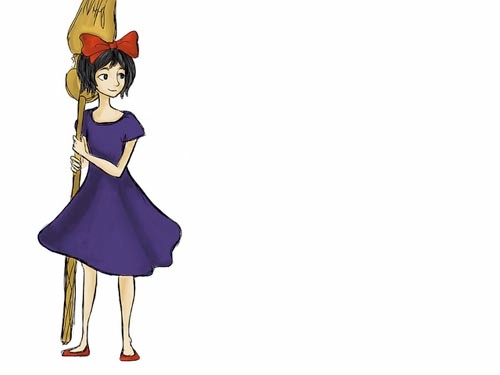 I know you were expecting to see my Aunt Gertie here, but unfortunately, nope – today, you have to put up with me, her nephew, Steven (best known around these parts as Stevie – cheers, Aunt Gertie).

Anyway, I know the question in everyone's minds right now is, "And why are you here, and not your aunt? Did she abandon us or something?" Relax, she didn't abandon you – much to the contrary. It was me who asked to be able to write a guest post, because I saw something recently that I thought would be really well-suited for this blog – namely, an animated film about running a delivery service! That's right, there's a kids' film out there with a main character who does the same thing I do – well, kind of. I'll explain in a second.

This was one me and my two little daughters found on Netflix, and it's called "Kiki's Delivery Service". It's a Japanese film, by a guy called Hayao Miyazaki, who's done a few other famous films – I think we even watched one of his at the theatre a while back. This is apparently one of his older ones, though. My family quite enjoyed it – and I got a kick out of seeing a main character in a children's' animation who also did deliveries! So did my girls!

The character, Kiki (the one the title refers to) does things a little differently than me, though – at least I don't ever recall having gone around delivering parcels on a broomstick! That's right, Kiki's a witch, and at the beginning of the film she's just moved into a new town. Once she's settled in, she realises the whole flying thing is a perfect way to earn a living, and sets up the delivery service mentioned in the title.

What did I think about it? It was fun! The animation is really good and the story is just quirky enough to interest my little girls – they just loved Kiki, too! The film takes a sort of darker turn towards the end, when the main character loses her ability to fly, but it is never too glum or scary for the age it's aiming at. At worst, Kiki's Delivery Service is harmless fun, at best, it's a good kids' film with something worthwhile to say. If you find it on Netflix or are able to rent it on DVD, if you're a delivery driver, there are worse ways of spending a rainy afternoon with your children!

Anyway, sorry for hijacking my aunt's blog to talk about movies, but it can't be all work and no play around here. And at least you got a fun post out of it! Hopefully…

See you lot around!