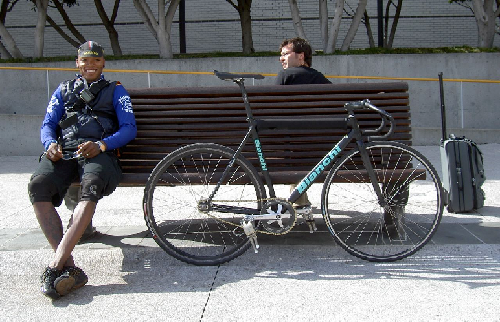 Well – wasn’t that quite the surprise! I always expect a lot of participation whenever I launch one of these fan-interaction thingies, but if you’ve read any of the ones I’ve published in the past, you know I usually have lots of opposite points of view to compare to make the debate interesting.

Not this time, though. This time, 90% of your posts leant in the same direction. It was amazing. I opened e-mail after e-mail in my inbox and almost all of them said the same thing, although in different words. The basic gist of it? Courier jobs are not going anywhere anytime soon!

That, if you recall, was my question to you: whether you thought that, with all the advancements of technology, courier jobs were doomed to disappear in the near future. Apparently, you all believe they are here to stay, if answers like the ones below are anything to go by.

Steven, from Cornwall, started out by giving us something to think about, as one of the few people who pondered the possibility of this type of job disappearing: “That’s actually a very interesting question you’re posing, Gertie. I’m probably slightly older than most of your readers – more around your age, I would say – and I remember a time when courier jobs were even more necessary than today, and not quite as widespread. We used to have to rely on the delivery boy from the grocery store in town to cycle all the way out to the farm – otherwise we had to go there ourselves to get what we needed. Nowadays, pretty much every supermarket and company delivers to your door, and often for free, which is excellent! I don’t know whether or not that tendency will change, though; as I said, I’m old school, so no matter how many robots you build, you will never convince me that good, old-fashioned man-powered jobs are ever going to become extinct. They might, though, and if that’s the case, I can see how delivery work would be at the top of the list to go.”

Most of the rest of you, however, were not so convinced:

“Courier jobs are not goin n e were dont be stupid old lady [sic]” – somebody who didn’t sign their name (or, apparently, go to school) says.

“I see your point about drones and printing your own stuff, but I genuinely think people are going to continue to rely on us couriers – most people hate machines anyway, they would much rather deal with humans, so I think we should be fine going forward!” – Jane, Herefordshire

“No. Even the best robots can only cope with so much – the rest will still be left to us amazing humans!” – Rob, Middlesex

“I think, even if traditional courier roles disappear, humans will still be able to get jobs in the industry. They just won’t require going around on a bike or van delivering packages – maybe you’ll be sitting in an office instead or something. But the courier business will always be around, machines or no machines!” – Jeff, Essex

There you have it, then – it seems all of you have more faith in the future of your own jobs than old Aunt Gertie! Good on you!

Until next time, my dears, stay safe!