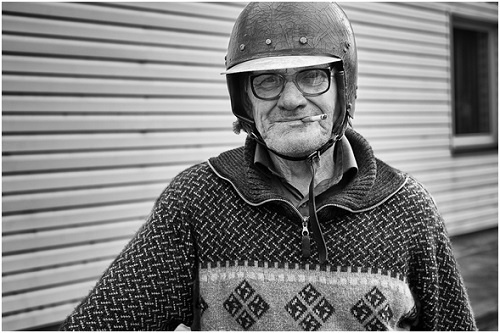 This month, Aunt Gertie is quite inspired, so prepare yourselves!

You see, ever since I took up delivery work to help out Stevie, I’ve been having a smashing time. At first, it was just going to be a temporary thing, but I’m having so much fun that sometimes I wonder if I should sell the cafe and just do this until it’s time to retire!

Which leads me to my next point: when you are your own boss, there is really no ‘retirement age’ that you have to adhere to. People who do owner driver jobs can keep going for as long as they want – until the day they die, if they so fancy! The question is...should they?

It was that question that brought about the idea for the next month or so of posts – I’m going to weigh the pros and cons of being a...let’s say ‘mature’ driver versus being a sprightly young buck just starting out and doing your first owner driver jobs. Now, normally, I would make this a month-long fan thing, where you would write in with your views and I would publish them; but being a member of the ‘mature’ crowd myself, I thought I might take this one on on my own. That’s why, on my next few posts, I’ll be looking at the advantages and disadvantages of having experience when working owner driver jobs, then doing the same for younger and less calloused drivers.

That is not to say, however, that I don’t want your input; on the contrary. If you have any stories or arguments to help support either side of the question, feel free to send them in. I’ll read through every single one – as I always do, even when I get dozens at once! – and if any particular one strikes my fancy, you can be sure you’ll see it here!