Owner Driver Jobs: Why I Could Do Them 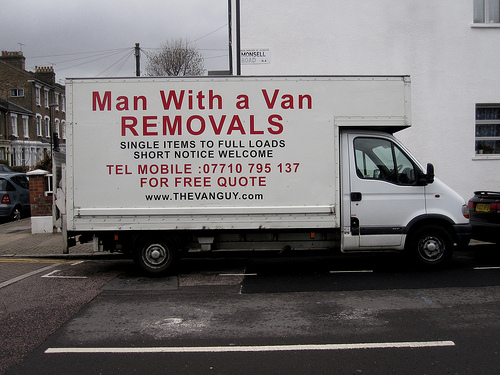 Removals would probably do my back in, though... ‘Man With A Van Removals’ (c) 2010 withassociates. Used under a Creative Commons license.

I was thinking the other day about what a self-centred month this is turning out to be for old Gertie. First I brag about how long I’ve been doing the blog for, then about giving an interview, then I post a bunch of messages praising me...simply dreadful, isn’t it? That was why I was determined to close out Unbirthday Month with something fun that would put the spotlight back on you or, alternatively, on the issues that matter to you, such as owner driver jobs.

But as they say, ‘best laid plans...’ All my good intentions ended up going out the window when a reader sent in a message along the lines of ‘you know, Gertie, if you really wanted to, you could do owner driver jobs just as well as any of us.’ I immediately had to ask him what he meant...and when the answer came, it surprisingly made a lot of sense. Here’s what he had to say:

“Well, if you think about it, owner driver jobs are not that different from running a café, are they? I mean, as the owner of your caff, what are your responsibilities? You have to deliver people’s orders on time, right? And they’re usually in a hurry, right? Well, there you go – that’s pretty much the same obligations people who have owner driver jobs have. Except we have to deliver parcels, not food, and we usually have to go much further than just a few steps from the kitchen to the counter. But the principle is the same – get something to someone within a certain period of time, and make sure you don’t make any mistakes, so that they will have no reason to complain. There you go!

That’s not all, though – in your case, Gertie, you’re also the owner of the caff, which brings you even closer to people with owner driver jobs, like me. Sure, running a café is a much more 9-to-5 job than driving around delivering parcels, and you can’t really ‘make your own schedule’, the way you keep pointing out that we can. But you could, if you wanted to. Near where I live, for example, there’s this barber shop where the bloke never opens before midday, but then stays open until gone midnight! That’s what I mean about being the owner. Just because you run a conventional sort of shop, doesn’t necessarily mean you need to have a conventional sort of schedule. You know what I’m saying, love?’

I DO know what you’re saying, ‘love’, and you’re making a lot of sense. Also, you’ve just given me an effortless post (ha!) AND a new-found conviction to maybe try my hand at owner driver jobs. An all around success!

See you lot next week, when we celebrate the ACTUAL anniversary of my first post by...probably not mentioning it again. Until then, ta-ra!